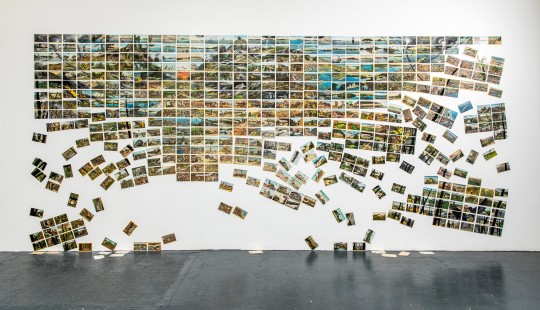 Seen from the far side of David Opdyke’s street-level studio in Ridgewood, Queens, his dire new art work, “This Land” (over 16 feet wide and 8 feet tall), looks like some sort of mosaic. A grid-work array of colorful tiles (parts of which appear to be falling away toward the bottom), portrays a panoramic bird’s-eye view down both sides of a V-shaped valley, the sun rising in the pristine distance. A crisp, lush pastoral expanse.

A bit closer up, and the individual tiles reveal themselves to be vintage postcards from the first third of the 20th century — black and white photographs overlain with stylized tinted colors, each one (and there are over 500) portraying a distinct slice of idealized Americana. Town squares, mountain highways, recently completed dams, main streets and county seats, lakes and rivers, forests and farmsteads: intimations of a prodigiously gifted country positively breasting its way into a confident future.