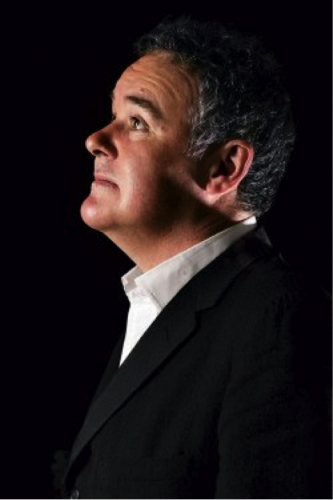 To characterize the BBC’s Adam Curtis as a documentary filmmaker is correct as far as it goes, but it’s a bit like describing Keith Jarrett as a mere piano player: There’s that, but so much more. Considered by the likes of Errol Morris and Walter Murch to be one of the most fascinating film­makers operating in the world today, Curtis is hardly a documentarian at all. He’s more like a wildly heterodox, extravagantly assured, occasionally quite loopy and often self-ironizing history lecturer. Both a new-model essayist (his work layers meandering narration over found footage) and a new-model paranoid (often finding at the centers of power not nefarious behavior so much as rank incompetence), Curtis has spent two decades cutting the endless BBC film archive into a series of brainy, free-associative mash-up meditations on the course of empire. And has done so with not just the Beeb’s consent but its support—sort of like what might happen if Oliver Stone got his hands on the national-security archives and remixed them for PBS.

Lately, he’s been deep in collaboration with the Bristol-based trip-hop band Massive Attack. Together, they’ve been trying to evolve yet another new way of doing documentary—a kind of full-bore son et lumière sensory-onslaught archival-footage extravaganza. The result—a complicated performance piece, with music, spoken word, and footage simultaneously projected over eleven screens and channeled back through dozens of booming loudspeakers—is ­Massive Attack v Adam Curtis, which premiered a few months back at the Manchester International Festival and will alight on September 28 at the Park Avenue Armory. It’s going to be loud—­complimentary precautionary earplugs may be offered at the door—and less, well, resolved than your standard night out. The trailer promises that, somehow, Curtis and Robert “3D” Del Naja (his principal Massive Attack interlocutor) will be weaving the stories of “Donald and Ivana Trump, Nicolai and Elena Ceausescu, Jane Fonda and Ted Turner, Hamid Karzai and his brothers, everyone in Goldman Sachs who made a killing in 2008, the neutron bomb, the Siberian punk movement, Bambi, and all your own worst fears.”

“Neither of us, Robert nor I, quite know what we’ve created,” Curtis tells me via Skype. “I call it a ‘provocative entertainment’ about what we’ve lived through over the past 50 years, from the idealism of the sixties through the collapse of those dreams in the seventies and their replacement by the triumph of a kind of managerial stasis, an imaginative paralysis imposed upon us by the powers that be—the marketers, the hedge-funders, the politicians, and I emphatically include the journalists in this—in which no one anymore aspires to a brighter vision of tomorrow, let alone toward the effort of realizing such a vision, in which we are constantly being told that this is all there is, this is how it has to be. But it’s worse than that,” he adds quickly. “Because we are constantly being fed these two-dimensional visions of the past, the dead past—not just in terms of fears but also desires. If you liked that, then you will love this.”

Born in Kent in 1955, the son of a cinematographer, Curtis appears disconcertingly youthful despite his graying hair, with a sort of Pillsbury Doughboy–meets–Huck Finn affect (even when he gets quite fore­boding). “We live in an enchanted cocoon that has become a sort of glittering sarcophagus, bounded on all sides by two-dimensional projections of beautiful celebrities and the like—many of them dead and yet beckoning us to stay, to ­linger with them forever,” he says. “We are going to try to evoke that toxic ­sarcophagus right there in the Armory.”

It won’t be Curtis’s first performance-art collaboration with Britain’s more cerebral pop stars—in 2009, Damon Albarn pitched in to help stage It Felt Like a Kiss, a free-associative fever dream of an ­argument about “how wonderful and how terrifying it is to be an individual” that linked, mostly convincingly, Doris Day, Rock Hudson, Richard Nixon, a young Saddam Hussein, Lee Harvey Oswald, Carole King, Little Eva, Patrice Lumumba, Tina Turner, Lou Reed, Mobutu Sese Seko, Enos the chimp (the first chimpanzee sent into space), and HIV, among other phenomena. And it isn’t his first time around the imperial sarcophagus—he’s been more or less ­living in that BBC archive, peerless and virtually inexhaustible, since he left Oxford, where he abandoned a Ph.D. in politics.

“I have the biggest repository, not just of film and video, but also audio stuff going back to the thirties,” Curtis veritably exults. “The archive is vast; it’s absolutely wonderful. It’s in a suburb of London in an anonymous large warehouse—we don’t tell people where it is. You’re talking about 80 years of recorded material. From the seventies onward, we’re talking about four different TV channels, night after night after night—endless film, a lot of which hasn’t even been transferred to tape, let alone digitized, and what videotape there is are sometimes two inches wide. It goes on for miles,” he says. “Sometimes I just like walking around there late at night, savoring the peculiar and odd feel of all these ghosts hanging about.”

He calls the habit his way of relaxing, “my own personal perversion,” and confesses to some particularized fetishes. “In the eighties and early nineties, the news programs would make these compilation tapes of feeds coming in from around the world; each night’s lasts about four or five days, and sometimes—say, Cambodia in 1980—it’s amazing. Just watching the stuff for a very long time—it’s simply not like the way news portrays stuff. Often quite the opposite.”

Curtis’s appetite for raw footage has meant that even the archive no longer completely satisfies. He’s recently taken to dispatching a BBC cameraman to the broadcaster’s many foreign bureaus (Moscow, Kabul, Delhi), “where he dives into the back rooms, opens up the cupboards, and downloads the unedited rushes of what the news cameramen have shot,” says Curtis. “He just came back to me with 23 terabytes of unedited rushes shot in Russia over the last 60 years.” The funeral of Kim Philby (the infamous British spy turned double agent turned defector to Russia) proved particularly spellbinding: “You see all the spooks coming out, reverently holding his medals on dainty orange cushions. And then this red-haired woman appears, Philby’s wife, who nursed him all those years through alcoholism and depression. It’s quite extraordinary. She leans into the open casket and kisses Philby’s corpse full on the lips, for seconds on end—almost four minutes. It really gets to be quite moving, love and loyalty breaking through like that into that narrow and nasty world.”

Philby is a key figure for Curtis, a sort of close study of how accident, personal vanity, and idiosyncrasy can shape the course of empire, and the funeral footage wound up on his remarkable blog, where since 2004 he has deposited long-form pieces of writing intercut with some of his choicest finds. In the Philby post—keyed to the recent NSA revelations and titled “Bugger: Maybe the Real State Secret Is That Spies Aren’t Very Good at Their Jobs and Don’t Know Very Much About the World”—Curtis builds to a slashing evisceration of MI-5 in particular and of intelligence operations in general. “It is not the story of men and women who have a better and deeper understanding of the world than we do,” he writes. “In fact, in many cases it is the story of weirdos who have created a completely mad version of the world that they then impose on the rest of us.”

Which is a pretty good summation of how Curtis sees the workings of power—that is, as quite contingent and deeply weird. While you’re there on his blog, you might also enjoy checking out some terrific material on Bahrain (including an interview with an unabashedly sinister British security adviser from back in the early seventies—a character straight out of Waugh by way of Machiavelli and Sade). There’s also a whacked-out reconsideration of the origins of the Western craze for yoga, which Curtis locates far from India, in the imperial neuroses of the declining British Empire (“Body Building and Nation-Building”). And, perhaps most revelatory of Curtis’s technique of subverting received material by recontextualizing it, there’s “While the Band Played On,” an eight-minute collage of snippets of people dancing, shown twice—the first time to an upbeat score that makes the result feel like a buoyant family-of-man celebration, the second time backed by spectral, premonitory, postapocalyptic music that seems to ­render the very same people isolate and lost.

And that’s just his blog. He’s also made those films, over twenty of them, several multipart, since 1983. There’s the six-part Pandora’s Box (1992), a dyspeptic evocation of the pitfalls of political and technocratic rationalism, with a particularly riveting first episode focusing on the catastrophic idealism of Bolshevik social engineers (where does he get such footage?). The first chapter of All Watched Over by Machines of Loving Grace (2011) does a similar number on Ayn Rand and her outsize role in the warping of capitalist practice, by way of such acolytes as Alan Greenspan (en route to explaining the rise of Silicon Valley’s technocratic-­utopian pseudo-thinking). The four-part The Century of the Self launches with Freud’s visit to America in 1909, but then follows his nephew Edward Bernays, the founder of public relations and a ubiquitous corporate adviser, through to the Mad Men world of focus groups, consumer desire, and mid-century anomie. And then there’s arguably his most important series, the three-part The Power of Nightmares (2004), an audacious retelling of the 40 years culminating in 9/11 and the ensuing War on Terror, one that presents the strangely parallel careers of militant Islamism and hard-core American neoconservatism, sequentially each other’s best friend (Afghanistan in the eighties) and worst enemy (9/11), to suggest that somehow, no matter how antagonistic, each enabled the other to amass power.

The version of history offered in these docs might sound pretty dismal—liberal democracy’s descent into mad bureaucratic despair. But then again there’s something thrilling about uncovering new connections, and therefore new horizons and perspectives. When I phoned Murch, the great film editor, to talk about Curtis, he resorted to the image of how the world must appear inside an egg from the point of view of the steadily developing chick. “At first it’s just yolk and white, and then the fetal chick takes form, continually nourished by the ever-depleting white surround, excreting waste all the while out to the edges of its existence. Toward the end there, things must begin to seem pretty dire and hopeless, the chick crushing against the limits of its world and veritably drowning in all the surrounding waste. But then, peck, peck, peck, somehow it breaks out into a whole new, wide, and previously undreamt-of universe.”

“Exactly!” Curtis shot back excitedly when I related the image to him. “Because, contrary to the aspirations of the managers, the world is not predictable, it is unpredictable, and our job is to change it. The managed world is an attempt to stop history—but you can’t do that. The most exciting thing to say to people right now—and this is where we hope to end up by the conclusion of the evening—the most exciting thing to say is, ‘Look, history is dynamic.’ And the point is to shape history once again—it’s a call to arms! ­Personally, I’m fed up with dark pessimism. It’s time to be optimistic.”