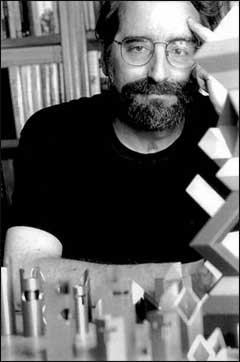 If you are at a party and Lawrence Weschler tugs at your arm, you are lucky because it means that something has fascinated him and he wants to tell you about it so you will be fascinated along with him, and that’s pretty much how his writing works too. It’s a friendly and welcoming technique. Now, Ren is our Transom Guest, tugging at our arms to talk about the dissemination of fascinations, in both writing and sound, and riffing on the musicality of words, why he doesn’t write fiction, and the way radio can sometimes astonish you. Ren was a longtime staffer at The New Yorker, has written several fine books (including the just-released collection Vermeer in Bosnia), founded the hopeful magazine Omnivore, and is director of the New York Institute for the Humanities at NYU. He’ll be at Transom for a little while, happy to converse.–Jay A

Back in 1984, after I’d been at the New Yorker for a few years, reporting variously on the arts and foreign hot spots (cultural comedies and political tragedies as I came to think of my peculiar bailiwick), I received a note one morning from the magazine’s legendary editor William Shawn asking me whether I’d ever thought about trying my hand at fiction. I sent him back a reply explaining why, even though fiction was just about all I read, I could never imagine myself capable of the form, and he seemed to find my observations amusing: a week later, at any rate, he ran them in the magazine as a Notes and Comment piece (“A young reporter we know writes”) — a piece which I in turn came upon again recently when I was compiling my latest collection (out this month from Pantheon as Vermeer in Bosnia) and with which I decided to introduce the collection... more