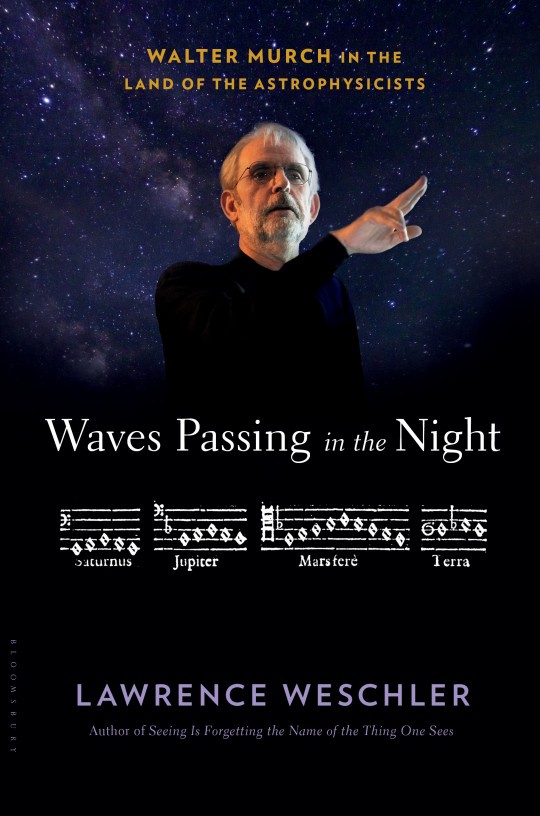 Ren’s new book, Waves Passing in the Night, tells the story of the greatly esteemed film and sound editor Walter Murch (THX-1138, The Godfather movies, Apocalypse Now, The English Patient, Particle Fever, etc.) and his decades-long sideline outsider passion for astrophysics, and in particular his attempts at rehabilitating a long-repudiated eighteenth century theory, named Titius Bode after its original promulgators, which claimed to observe a quite startling regularity regarding the relative orderings of gravitational objects (planets, moons) around their primaries (suns, planets) and what that regularity, if in fact accurate and established, might portend in a wider context.  In other words, gravitational astro-acoustics. On top of which, Murch claims to have discerned a specifically “musical” character to that ordering—the relative distances repeatedly arraying themselves as if in octaves and overtones.  Thus for example, in one section of a recent presentation of his (alongside Weschler—see the link following this one on this webpage for the full conversation at the Hammer Museum in Los Angeles), Murch lays out the sequence of notes aligning with the relative distances between the nine planets (including Ceres, minus Neptune) in our own solar system, to wit:

Part of Walter Murch's presentation, including the sounds of the solar sytem, referred to in Waves Passing in the Night (audio begins after about 15 seconds):

Furthermore, in the wake of the book’s publication, the existence of a new and promising exo-system has been discovered and announced, to considerable media fanfare, seven roughly earth-sized planets orbiting around the dwarf sun Trappist-1, roughly twelve parsecs from our own solar system (three of the planets thought capable of supporting life).  Murch has studied the data here and finds that once again the planets array themselves in a distinctly “musical” (albeit different) pattern.  The Musical Ratios of Trappist-1 system’s “underlying landscape” as Murch describes it are:

And they sound like this (and notice how the first three notes quite uncannily, though entirely coincidentally, anticipate Richard Strauss’s Thus Spake Zarathustra theme, made famous at the outset of 2001: A Space Odyssey:

NOTE:  Murch points out that the “underlying landscape” of the Trappist-1 system does not follow the Titius-Bode-Murch pattern of (2.0 or 4/2) doublings between the widenings troughs in the undulating (notional) “sound wave” sequence, but rather, following the Titius-Bode-Lineweaver variation, the rate of expansion between the widening troughs in this particular system is more like 1.3 or 4/3, which is to say the ratio between the idealized troughs expands at a rate of 1.3 (with individual planets varying from the ideal by as much as 5%, somewhat more so than in our own solar system).  And yet a musical sort of relation still obtains (it’s as if the Trappist-1 system is tuned to a different pitch than our own Sun’s, but they are still both distinctly “musically pleasing”).