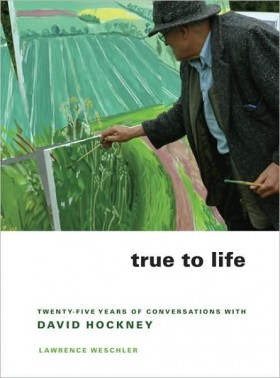 “The mutual fondness between author and subject comes through in long passages from Hockney detailing his ever-evolving process, the importance of Cubism and other digressions that would test the patience of less confident or invested interviewers”
– Publishers Weekly, Starred Review

Soon after the book's publication in 1982, artist David Hockney read Lawrence Weschler's Seeing Is Forgetting the Name of the Thing One Sees: A Life of Contemporary Artist Robert Irwin and invited Weschler to his studio to discuss it, initiating a series of engrossing dialogues, gathered here for the first time. Weschler chronicles Hockney's protean production and speculations, including his scenic designs for opera, his homemade xerographic prints, his exploration of physics in relation to Chinese landscape painting, his investigations into optical devices, his taking up of watercolor—and then his spectacular return to oil painting, around 2005, with a series of landscapes of the East Yorkshire countryside of his youth. These conversations provide an astonishing record of what has been Hockney's grand endeavor, nothing less than an exploration of "the structure of seeing" itself.