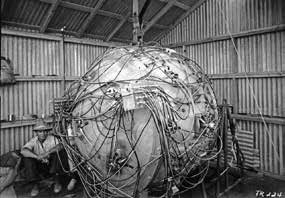 One morning a few years back, I happened to be walking along South Ellis Avenue on the University of Chicago campus when I noticed a plaque marking the site where Enrico Fermi and Leó Szilárd and their colleagues achieved the world’s first nuclear chain reaction, on December 2, 1942, right there inside what were then the squash courts, tucked under the bleachers of the university’s Stagg Field. Drifting into a nearby building, I came upon a little commemorative display, including a drawing of the atomic pile itself, a remarkably makeshift-looking assemblage of graphite blocks housing uranium pellets which bore an uncanny resemblance to some sort of Babylonian temple from the times of Nebuchadrezzar (or, anyway, Indiana Jones’s approximation of same), and then, as well, a photograph of the Trinity device, direct descendant of that Chicago pile whose detonation in the New Mexico desert a mere two and a half years later, just as the sun was rising on the morning of July 16, 1945, signaled the astonishing triumph of the Manhattan Project and of course plunged mankind into a portentously new era all its own. (“Now I am become death, destroyer of worlds,” the project’s leader, J. Robert Oppenheimer, subsequently recalled thinking as he watched the mushroom cloud rising high into the blackened sky, famously invoking that harrowing line from the Hindu Bhagavad Gita.)