Destroy This Mad Brute: The African Roots of World War I 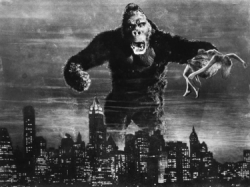 From The Believer, September 2014

The coming 100th anniversary of the start of the First World War has been pouring forth a whole variety of stark and sobering images, but the one that really startled me the other day was a US Army enlistment poster, from 1917, fashioned by the noted stage designer H.R. Hopps and in turn based, we are told, on a whole slew of British propaganda images from earlier on in the war: a huge, hulking, drooling man-ape, capped by a pointed Kaiser-helmet (labeled “militarism”), wielding with one arm a mammoth wooden club (labeled “Kultur”), gripping a half naked fainting maiden in the other, coming lumbering out of the sea onto dry land (labeled “America”), the abject ruins of his European depredations smoldering in the far distance behind him: “DESTROY THIS MAD BRUTE” implores the none-too-subtle poster’s none-too-subtle headline.  And we are off: welcome to the rest of the century.