Poolside with David Hockney, Richard Feynman, a pair of Twins and some Bugs 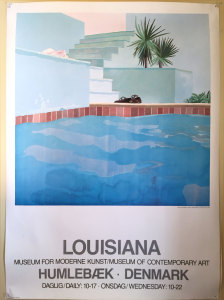 There’s a painting of David Hockney’s that I’ve always really loved, though never gotten around to writing about; but now, in the final craw of winter, it seems as good a time as any to dip into the image’s coy allure. It’s one of his pool paintings, which as a group played on all sorts of themes of surface and transparency and awareness and memory (the wet paint on canvas, drying, summoning the fading memory of what it was like to soak in the water that balmy distant afternoon, observing the dance of light on the surface of the water and to the depths beneath, mirroring what happens as we focus on the pigments on the canvas surface and through them, to the imputed image beyond, the pool, the sandals, the steps, the palms, whatever lies beyond—all of them, all of it, just so many pigments in play and yet so much more).