The Art of Ramiro Gomez 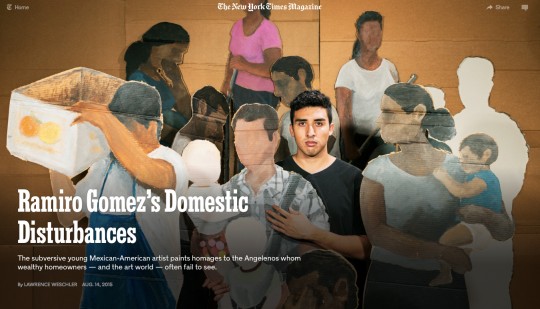 I first noticed the work of the young Los Angeles artist Ramiro Gomez across a series of recent art fairs, on account of those Hockneys of his: that is, paintings that were dead ringers for Hockneys — same scale, same colors, same composition — except that something was always just slightly off. Take Gomez’s large-scale version of Hockney’s iconic ‘‘American Collectors’’ double portrait, for example, which Gomez’s Los Angeles dealer, Charlie James, exhibited at the most recent Expo Chicago. It looks almost exactly like the original portrait of the couple in question, clenched in a grim rictus amid the sculptures in their backyard garden, except that Gomez replaced the two collector protagonists with a pair of dark-skinned gardeners of the sort who regularly do the actual tending of such gardens. Into another Hockney, of one of those nondescript West Los Angeles apartment buildings with its wide front lawn, Gomez slotted a groundskeeper, rake extended. That was the genius of the whole series: how in much the same way that, back in the ’60s, the English transplant Hockney first opened our eyes to so much that we had previously overlooked in Los Angeles, rendering all sorts of things visible to us as if for the first time (those boxy apartment buildings, the distinctive street signs, the moderne furniture, that light), so Gomez seemed to be allowing us, indeed forcing us, to notice the very groundskeepers and housemaids and pool cleaners who make that look, the look of Los Angeles, possible, rendering visible a whole world of people, our fellow humans, who often go unseen (and who, for that matter, because they are sometimes ‘‘illegal,’’ often strive not to be seen).