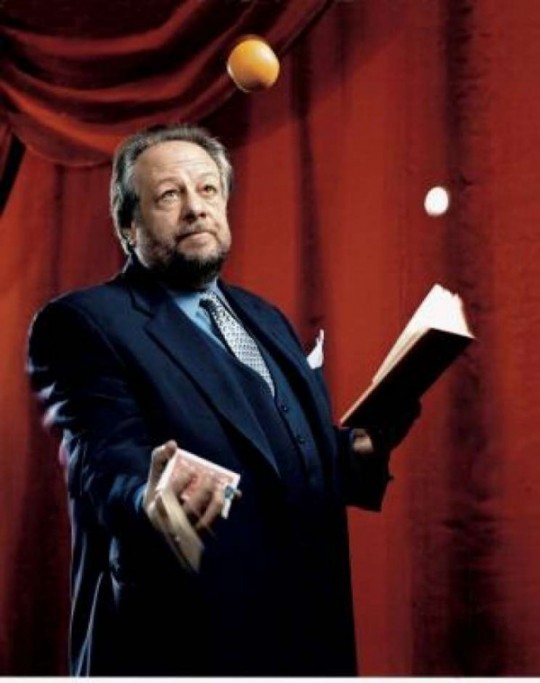 Just under a week ago we lost a dear member of the McSweeney’s family, Ricky Jay. We asked his friend Lawrence Weschler to share a few words.

Not a morning has gone by over the past week where I haven’t woken to the same stunned awareness (zero to eighty in the blink of an opening eye), each time as boggled as the time before: Yet Another Day in a World without Ricky! How could this possibly be? Nor do I suspect that I am alone among his fans and friends in having these recurrent moments of shuddering world lapse. For one was never a mere friend or fan of Ricky Jay’s: he elicited a preternatural devotion. One was soon every bit as beholden as one might at first have been merely beguiled.

I say merely beguiled but, of course, it was never merely. Most of us became aware of Ricky initially through his magic shows, if only just by word of mouth (as the shows themselves were famously attenuated in terms of attendance, seldom more than a couple hundred live witnesses at a time) or else his television appearances (though even there the sense of being a part of a mass audience seemed to melt away, as the viewer sensed him or herself being addressed in their intimate and presently gobsmacked particularity). Simple recounts of his sleights of hand invariably involved catches in the narrative as pillows of stilled air seemed to become lodged in the teller’s mouth, tokens of a world (hand to mouth) still upended. (This is why the makers of Deceptive Practice, a documentary about Ricky, from a few years back, so often had recourse to people describing Ricky’s jaw-dropping effects, rather than mere video of the same: the experience of his sleights became existentially charged.)

It was as if — and I’m hardly the first to have ventured the analogy — Ricky were some sort of Wonder Rabbi, a font of tales. Like any Wonder Rabbi, he embedded his own teachings (That’ll learn you!) in a history of other such teachings, the precious legacies of prior masters. But also like every Wonder Rabbi, he embodied them, becoming a veritable font of tales about (becoming the very stuff of stories as he lived, painstakingly fashioning himself into another link in that chain of consequence, as if by yet further magic).

For it was never just the magic: the magic came wrapped in superb and superbly cadenced banter. It was the quality of the voice, and that voice carried over into his writing as well. (Or rather, maybe the other way around, for he labored constantly at perfecting the train of words and pauses with which he accompanied his various sleights, distilling past traditions — carnival barking, burlesque, elaborate cons, arcane scholarship — into a vividly distinctive personal style.) He titled the book we had the great good fortune of his doing with us here at McSweeney’s back in 2011 — a digest of the scripts from a year’s worth of weekly four-minute radio pieces that he’d perpetrated over KCRW, the Santa Monica-based NPR affiliate — Celebrations of Curious Characters. And all three words seem apt in summoning forth the quality of that voice, which was equal parts ever-brimming curiosity, generous celebration, and soul-steeped character.

And that last perhaps most of all. For those of us privileged to have been counted among his friends, if ever so glancingly, it was the burnish of his character that still most haunts and enswaths us, and probably always will. The generosity of his concern; the particularity of the attention he lavished upon each of us, one at a time, in turn; the delight of his delight, and even the delight of his dismay. For it needs be added, the Touchstone of As You Like It— with his careful adumbration of the Retort Courteous, the Quip Modest, the Reply Churlish, the Reproof Valiant, the Countercheck Quarrelsome, and so forth — would doubtless have met his match in Ricky, a Past Master of the Kvetch Sublime. A magnificently looping kvetch, given over to higher and higher piques of grievance, that nevertheless came wrapped in love, for all he ever expected of the world (an expectation that, granted, was continuously being dashed) was that everyone bestow the same care and attentiveness on each and every little thing that he always seemed willing to do in return.

And in the end, that is what most stands out, the love that came pouring off the man (sometimes in spite of and in contradistinction from his would-be grumpy hard-nosed self-presentation), love that in turn elicited love in return. For he not only had but was the Softest Touch, and he was and will remain Most Beloved.